August 2014 we were on holiday in Bangalore India for just 2 weeks. When I heard that my aunt was ill, my cousin and I decided to take a short overnight trip to visit her in Kerala.

We took the early morning flight with a return ticket for the next day. We heard about the strikes as we were almost boarding the flight. We arrived in Kochi airport about 9 a.m. and wondered how to reach our destination. Due to disturbances on the streets nobody could come to pick us up. We decided to go with the flow.

There were no taxis or buses going anywhere. However, there was one Police escorted bus going to just one destination — Aluva Train Station. We decided to take this bus. 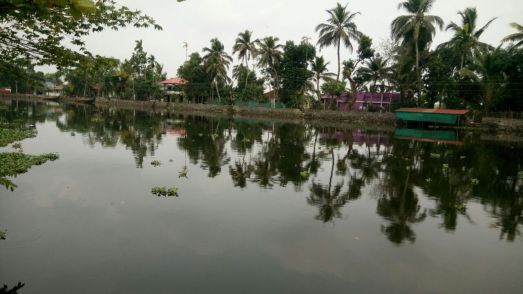 Arriving at the Aluva station we spent a couple of hours enjoying Neyyappam and Tea, catching up on gossip and waiting for a train. We took the first train that arrived which was going to Ernakulam.

In Ernakulam we came to the entrance of the station wondering how to go further, when we a saw a few cars driven by Anti Hartal Volunteers supported by the police, helping passenger to some central locations.

d passengers. The young man who drove the car was an entrepreneur who was part of the Anti-strikes movement. We were dropped off at Palluruthy police station which was the closest point to our destination that they could drop us.

Here we waited for our cousin to pick us up. He arrived with his friend with their motorcycles. Luckily, we did not have much luggage just a backpack. We rode on their bikes towards our destination Kumbalangi.

We walked the last few meters between small paths to reach Auntie’s home at last. It was already evening and almost time for Dinner!!

What a beautiful journey!! So much adventure!! We will never forget this trip. We took the Plane, Bus, Train, Car, Motorbikes and walked and finally arrived to see Treasa Aunty!!

Aunty Do you see how much we cared for you. Thank you, Aunty, for all the times you visited and stayed with us and all your help when mom was ill. Thank you for all the lovely stories and experiences you shared with us. I am glad we could fulfil your one last wish to eat Biryani Bangalore Style.